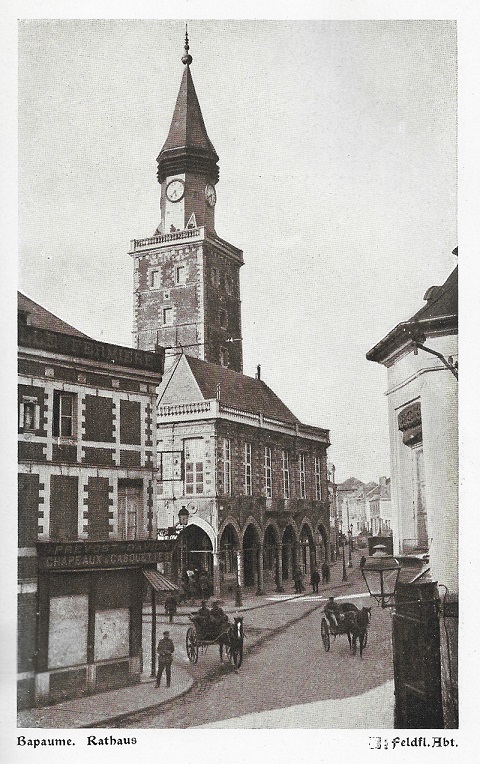 Saturday 25 July. The town is in holiday mode. This is the start of the fête du Faubourg a Bapaume.

Sunday 26 July. The 33rd Infantry Regiment arrive in Bapaume from Sissonne in en route to Arras.

Saturday 1 August. In Bapaume and its surrounds, reservists are ordered to guard the railways.

Sunday 2 August. General mobilisation in Bapaume and in France

Monday 3 August. Germany declare war on France. In the region of Bapaume, all horses are requisitioned.

Monday 10 August. The first train of refugees from Maubeuge arrives in Bapaume.

Wednesday 11 August. A field ambulance post is established by Mme Deron at the college in Bapaume.

Sunday 16 August. The defence of Arras is arranged by general d’Amade. Various train containing British Soldiers pass through the station at Achiet.

Monday 24 August. The evacuation towards Bapaume increases from persons from Conde, Valenciennes, and Cambrai.

Wednesday 26 August. Various territorial divisions are put in place in Arras and other towns in Pas de Calais. There is a battle at nearby Beugny which can be seen as a prelude of the battle of Transloy, Rocquigny et Sailly-Saillisel.

Friday 28 August. The battle of Le Transloy, Rocquigny and Sailly Saillisel. The French are routed with the 62nd Infantry regiment suffering 800 killed in two hours.

Saturday 29 August. The Germans arrive at the outskirts of Bapaume.

30 August. The start of the German occupation of Bapaume and its regions

6-9 September. Arras is occupied by the Germans.

Sunday 27 September. The Germans are back, once again occupying Bapaume.

Monday 28 September. There is fighting at nearby Achiet le Grand