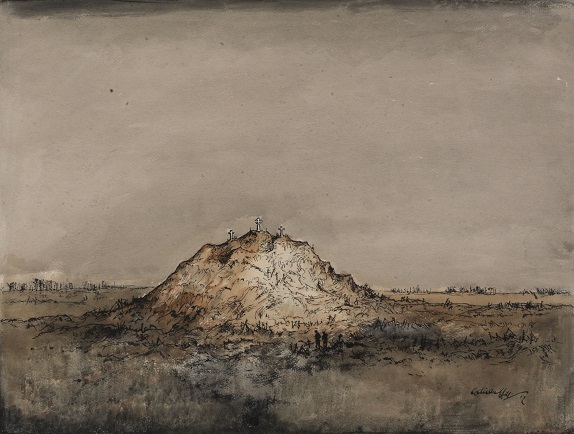 This lovely drawing of the Butte by Adrian Hill dates to 1917 courtesy of IWM Art4238. The logo of the Butte de Warlencourt Association (which of course you are invited to join by following the link at the top of this page) is based upon this drawing.

THE BUTTE AND THE BAPAUME AREA

Originating back to Roman times, the Butte (French for ‘hill’) is a mound some sixty feet high standing close to the D929 Albert-Bapaume road. In WW1, it was held by the Germans at the end of the Battle of the Somme in 1916 and in a fashion, marked the final line of the British advance on the Somme.

According to the British WW1 War historian, the Butte was "a chalk mound some sixty feet high, on the slope of a spur overlooking the Bapaume road. The Butte afforded excellent observation of the low ground to the south west and also in the opposite direction towards Bapaume in which area were many battery positions; its importance was fully appreciated by both British and Germans." However Charles Carrington in ‘Soldiers from War Returning’ exclaimed perhaps more accurately:" ... the Butte of Warlencourt terrified us. A dome of gleaming white chalk from which all the vegetation had been blown away by shell-fire, it was the most conspicuous object in the landscape by daylight or moonlight. The Butte seemed to tower over you and threaten you. We did three tours in this sector in November and December, the worst in my experience"

As you can see from the section header categories above, this history section has been designed to give fuller details of the fighting and related which has taken place at this very special area not only in the First World War but also before that war. In the pre 1914 section as an example there is a piece covering the 1870/71 Franco-Prussian war action in the Bapaume sector.

Regarding WW1, in the post 1914 section apart from giving details of the attack by the 50th Division on the Butte on 5 November 1916 as narrated by Roland Bradford,we have added a nice piece covering the weather and underfoot conditions in the autumn 1916 Somme battlefields. These factors and their effects were no doubt an equally as big an enemy at the time as were the Germans. The book Twelve Days The Somme 1916 by Sidney Rogerson is a must read as it describes the awful conditions perfectly. Finally we have put in the Post 1914 section a relevant article giving a summary of the main attacks on the Butte late in 1916, the Butte of course remaining undefeated in that year.

We sincerely thank Butte associate Blanche Crossan for giving Bob background material regarding the Bapaume area pre the First World War. Bob went through it and as above added a nice piece on the 1870-1871 war in the area. There is no doubt whatsoever that the Butte was involved in that brief war action early January 1871.

Finally we thought it useful in this overview to highlight a few of the key milestones when the WW1 arrived in the Bapaume and its surrounding areas in August and September 1914. These are great for background and of course general interest purposes.