THE BUTTE & SURROUNDING AREA BEFORE WORLD WAR ONE

Below you will find a couple of articles which we hope you find of interest. Firstly there are details regarding the 1870-1871 war in the Bapaume area. All the memorials mentioned are easily accessible. The second article is a nice interesting summary of the background of the villages of Warlencourt and Eaucourt which together form the commune of Warlencourt-Eaucourt. Thanks to Butte associate Blanche Crossan for supplying Bob with some fascinating papers regarding the area before World War One. For info, Bob has also visited the local Societe Archeologique et Historique de Bapaume in Rue Jean Baptiste Lequette, Bapaume which is open every Wednesday. The guys there were very welcoming and helpful indeed, many thanks to them. 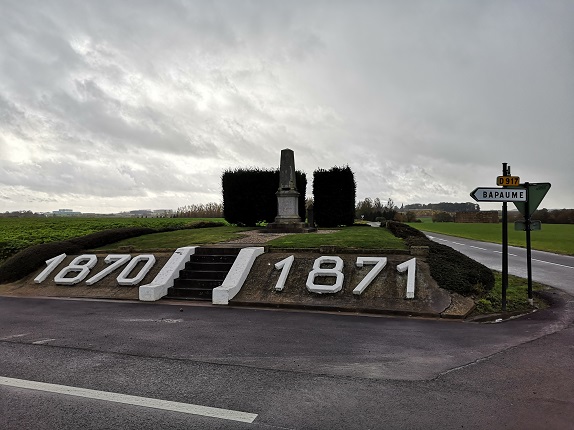 The war of 1870 left a profound mark on the French. After the war, many memorials were erected on the battlefields encouraged by the local committees of Souvenir Francais. Successive governments wished to promote to the attentions of passers by the tombs of the soldiers whereby simple stone graves, columns, obelisks and pyramids came to represent the main focus of commemorations. in the area of the Butte,the battle for Bapaume started on 2 January 1871 where General Louise Faidherbe was to lead the Armee du Nord in order to repel the enemy. Depending on the book you read the result of the battle was a French victory. The less biased may call it a draw.

Today in Bapaume, certain streets in the town now carry the name of the generals of the Armee du Nord i.e. Lecointe, Derroja and Payen being examples. Situated in front of the Hotel de Ville of Bapaume is the statue of Louis Faidherbe, the work of sculptor Louis Noel. Inaugurated in 29 September 1890, the statue was overturned by the Germans in World War One thinking it was bronze. It disappeared shortly thereafter. The base remained empty for 13 years. In 1926, the community decided to sculpt Faidherbe again working from the original plans. The new monument was inaugurated on the 18th August 1929 by Paul Painleve, the French Minister of war. As part of a refurbishment of the square in Bapaume in September 1997, the statue and its original base were moved to in front of the Hotel de Ville. During the moving of its original base, a lead plaque was discovered below the base which highlighted the names of the municipal councillors of the era one hundred plus years earlier when the statue was first erected.

In the Butte and Bapaume area there are several memorials to the war of 1870-71.In the communal cemetery situated at the west side of Bapaume is the site of a large cross memorial and is the site of 186 combatants. The memorial was blessed in 3 January 1872, a year after the war ended. In nearby Favreuil lie 28 French and 9 Germans whilst in Biefvillers lie 290 French and Germans. In Behagnies, the ossuary holds 67 French and three Prussians. In Ligny Thilloy, another memorial is in the local cemetery just outside the village.

Probably the most viewed and pictured memorial is situated just past the first roundabout leaving Bapaume on the main N17 road to Arras. This location can be described as the cross roads to Bapaume, Biefvillers and to Favreuil. The large numbers 1870-1871 can be clearly identified on the memorial situated on the road side. This monument was erected by the Conseil General du Pas de Calais after being petitioned by the locals who wished to see a memorial in the location. Behind the monument is the grave of a Prussian soldier. 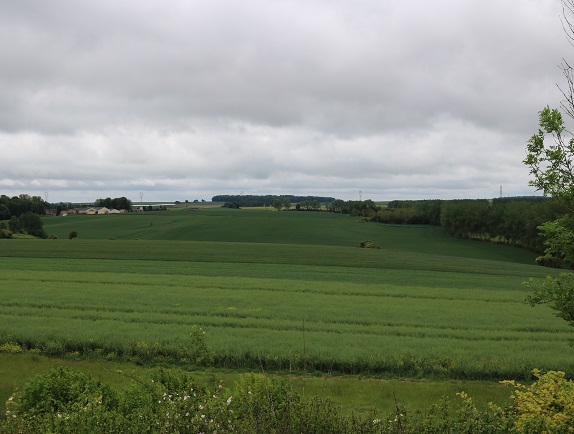 Warlencourt-Eaucourt is a commune created over the centuries situated close to Bapaume which as many WW1 enthusiasts will know is a small town situated just off the D929 main road, midway between Arras and Albert.

Warlencourt meaning the ‘House of Warlon, is the village situated across the road at the bottom of a man made hill called the Butte - a mound covering around a hectare of ground, the origins of which are distant and uncertain. Historians have defined the Butte as a hill made of stones and earth which contained several graves. These stones no doubt come from the neighbouring quarry very close to the Butte and on the right hand side of the pathway up to the entrance to the Butte. Archaeological searches in the middle of the seventeenth century revealed a sarcophagus containing several bones, arms and a helmet. Other archaeologists are of the opinion however that the Butte was a small fortress offering a perfect view over the Ancre valley, its strategic position was also said to be, that under the control of the Romans, the Butte was used to look over and protect the road from Bavay to Amiens. Finally, the idea that the Butte was the site of an old windmill cannot been discounted. As any visitor will know, it is certainly perfectly situated to make the most of the wind.

Eaucourt over the centuries has been called Aiulcurtis, Aecurtis and Yaucourt before settling on the current name Eaucourt from the middle of the eighteenth century. It was around the 11th century that L’Abbaye was built at the edge of Eaucourt. The era of increasing growth of cathedrals and crusades to the Holy land has arrived with the number of Abbeys in Christian territories increasing dramatically. Eaucourt had its place therefore in this exercise. After the agreement signed by Napoleon and Pope Pius 7th, L'Abbaye lived in tranquility until the arrival of the great War in the area which saw the already started 1789 French Revolution damage and destruction completed.

L'Abbaye was founded by the priest Odon who choose the life of a hermit however after a modest start Odon was not long in wanting to re-join his companions with the L'Abbaye going under the rule of Saint Augustin. This rule involved a vigorous life fully dedicated to god which also saw the abolition of private property to the resulting profit of communal property. L'Abbaye lived of the fruits of its land and revenues and could accommodate and easily offer shelter to its neighbours in times of danger. Odon decided to place the L'Abbaye under the patronage of Notre Dame so the title of Notre Dame d’Eaucourt was born. A church was built by Abbe Baudouin during the 13th century which was to be the heart of the L'Abbaye site however after being destroyed the following century, it was rebuilt under the direction of architect Michel Diallet around 1600. The church which celebrated births, marriages and masses however was destroyed during the French revolution in 1795.

The picture shows the site of the current day L' Abbaye d'Eaucourt (top left) from the top of the Butte. This photo also shows the current day location of several important October - November 1916 action areas such as The Pimple, The Nose, The Tail, Snag Trench etc. The site of what was Eaucourt windmill is to the right of the farm buildings located just off the road to Le Sars.